- December 20, 2015
Well we're nearly here, Winter Solstice, Saturnalia, Yule or Christmas - the festive season whatever you choose to call it!
So many people celebrate in such different ways and even on different dates. By my reckoning, the shortest day this year by 1 whole minute  will be on 22nd and the longest night will the night of the 22nd/23rd so that's when we'll be doing some of our celebrating.
I duly wrestled with the holly I had been given also found a few stray pine cones that had been part of an old bag of festive pot pourri but now just smelt of the loft (what is that smell?!) so they were treated to a quick dusting of silver spray and added just enough detail to the holly - I'm very pleased with the result.
I was inspired by the article I shared on my Walking with my Goddess facebook page last week about Modraniht - translated roughly as Mother's Night this ancient Germanic festival that was lost after the widespread of Christianity, it is said to have celebrated motherhood, probably the female ancestors and it is suggested it went on for more than a few days encompassing the Yule period, this sounds like a perfect a celebration of Goddess! I've just found and added the second part to the facebook page....
Whilst brought up in a Christian household, I have to say I did always think that Christmas seemed to be unfairly all about Jesus, not much mention of the poor woman who gave birth in  stable, just a hint of my future path there then... anyway I'm not Christian bashing which sadly seems to be popular in some Pagan circles - not any of mine I'm glad to say. In light of this, every day I have made sure to thank my Goddess, my female ancestors and to remember them when I light the candle in the wreath decoration I made, especially as I found out that the holly and mistletoe berries only come from the female plants.  Still in a creative mood I managed to finish off the presents that I was making, so now two very special people have their presents complete at last! No spoilers as I know at least one of them will read this, maybe not tonight as she's on her work's Christmas do, but lets just say some of it is home grown!
Yesterday I joined The Kent Gorsedd a Druid based  Bardic group for a Winter Solstice ceremony at  the Coldrum Stones an ancient long barrow about 8 miles from my house. With stunning views like this you can understand why the ancient folk that lived here buried their dead in this remote place to rest for eternity - if that is what they thought? It's also a beautiful place to sit and think, so to me at least would have been  wonderful place for them to sit and connect with their ancestors.This is the land of my Mothers and Grandmothers and all the ancient Mothers that went before. I arrived early and was lucky enough to have the stones to myself for a while - this gave me a chance to thank Goddess for all my blessings and to ask for a few cheeky extra blessings for me and mine over the Solstice period ....one being a car that actually works! I clearly wasn't the only one as the local Clootie tree was adorned with streamers of ribbon and rags. Part of me thinks it's beautiful and part of me thinks it's littering, at least fabric will rot and go back into the earth but there are streamers of plastic bags too, gaily waving in the wind that sadly will not.
After meditating for a while, I was concious of a drum beat and found that a fellow seeker was preparing the stones for  the ceremony and that the procession was making it's way through the fields. After everyone gave an offering to the earth - food, drink, leaves, berries the procession came to the top of the barrow, called in the quarters and elements and we sang Pagan carols then snipped Mistletoe from a bough despite being harried by the 'dark circle' pulling at our clothing and pushing hats off! After a lot of mirth we heard poems and sang some more carols before all partaking in a celebratory  sip of mead! Again the mix was extremely eclectic: druids, witches, wiccans and other paths and it is so beautiful to see so many paths come together to share the Sabbat - I had a lovely and interesting conversation with a lady about Goddess and my beliefs and her path with earth spirits, if only the whole world could share moments like that. 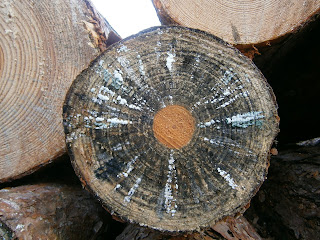 So as all cycles turn, here we are back to the beginning of this post - Solstice - time to welcome the light back, time to think about what has been, to think on of our ancestors and time to hope about what will be as the sun returns and Goddess brings life back to the land.
This beautiful log I found on the path to the stones ages to about 40 years old not much different to me, the fungi growing on it was white and blue, forming a curious pattern that put me in mind of snowflakes and also the suns rays as it returns to our land lengthens days and warms the earth.

So How will I celebrate Solstice? A family meal on Tuesday after watching the sun rise and set on the shortest day, then burning our Yule log and offering thanks for all the beauty and love in my life, observing the dawn after the longest night and the celebrating a traditional Christmas with my wonderful family and hopefully seeing a fair few of my lovely friends, I don't think Goddess will be exacting about which day I celebrate - the Wise Woman will be revered and loved every day, candles will be lit, prayers will be said, carols will be sung, families will meet and have fun, ancestors will be remembered with love.

Wishing You All A Blessed, Happy and Wondrous Yule  x x