- December 06, 2015
Wow, what a weekend! I don't think I've stopped since I got up yesterday morning, but all in a good way! In fact it seems to have been like that all week - both at work and at home! Spurred on by my new found faith in my creative ideas and buoyed up with wild and windy Crone energy buffeting us at the moment, I started with finishing mini Santa Sacks for the cats (yes really!) for their cat mint mice I made earlier in the year using cat mint from our allotment, along with their Christmas dinner treat of luxury cat food and chewy sticks! So, officially a crazy cat lady, I moved on to some presents for humans...Deciding to do the same as when I try a new recipe for food, I grounded and called Goddess in before I started, particularly asking for wisdom and intuition then blended and mixed some bath time 'teas' for presents, first using an existing recipe from my lovely 'gifts from the garden' book I was given for my birthday back in April (a mere 35 posts ago - when I started this year long blog) and then getting braver mixing a blend that I thought would work and they smelt, well pretty luscious to be honest, even if I do say so myself!
It felt like that Crone energy was working with me, some instinct was kicking in and some ancient wisdom was waking up deep within me and a familiar voice was saying 'oooh, try mint with the lemon verbena, what about a bit of rosemary?' as I looked at my collection of dried herbs and plants hanging on my dresser, some home grown
and some, like the rosemary, bargain hunted in the local supermarket late at night costing just 10p as it was going out of date and hung up to dry.
I have to say that as I sat at the sewing machine, foot hard down on the pedal, happily humming away to myself and hammering my through making these muslin 'tea bags', I felt a curious mixture of satisfaction, pride and also sadness that these skills our grandmothers wouldn't have thought twice about using daily, were shed so easily in our bid for equality, to distance ourselves from our ancient and more recent mothers. That's not in anyway meant to denigrate the efforts and hard earned achievements of the hundreds of thousands of women who campaigned for equality and universal suffrage, and the women who have carried on the fight to this present day, far from it, I am incredibly grateful that they did, for what they fought to achieve, I really and truly am, but I just feel the loss of joy, pride and skill of 'homely' crafts is such a shame. On the flip side, I suppose our strength and sense of empowerment that they fought for means that we can chose to retake control, and elect to relearn and employ these skills because we want to and reclaim our creative joy and skills, not because we are told that's what we'll do!
I deliberated about leaving that last paragraph in, but after a break, a glass of wine and some musing, I decided to, I know I'm mainly interested in the feminine divine, but further thinking suggests to me at least, that it could apply to men and their long forgotten traditional skills too - so as long as people are free to enjoy ANY creative skill, irrespective of their gender, we should gleefully reclaim them all!
Anyway, apart from all that musing, I've been immersing myself in plenty of seasonal celebrations and moots this weekend. A visit to a spiritual and holistic fayre organised and run by some lovely members of the local Pagan group that I have just recently taken over the admin and running of - that in itself is quite a mission! I've been applying Crone logic, quite literally - bin what isn't working, start afresh and be creative! First new moot is next Sunday, I'll let you know how it goes! That was followed by just the three parties yesterday, with a surprisingly restrained earlyish home time and early start today.
I headed off to Bromley this morning for a moot with other like minded people, up until now only known through the powers of facebook. Slightly anxious, I have to admit, I nearly ended up beetling off with the local re-enactment group, but the timely arrival of a member of the right group and his distinctive dreadlocks meant that I actually found the intended group and a very warm welcome and was saved from re-enacting some Saxon and Viking fight that I might have enjoyed but would have undoubtedly confused me no end and I was worrying about the amount of weapons they were carrying and my lack of matching attire! After some interesting discussions and exchanges of ideas we headed off for a fabulous walk and talk about sacred trees for a couple of hours in local ancient woodland, yep more trees - sorry! I was very much taken with this sprouting Oak, which was an estimated 600 years old but had new shoots of a few years growing from the base - an ancient grandmother and granddaughter maybe? One of the group members gave an interesting and comprehensive talk throughout - who knew that oak bark is the only one to run purely vertically? If you look closely at the photo to the left of a Woodpecker's hole you can see the grooves in the wood where the bird has pecked and pecked to perfect the entrance to their nest. I don't think I've seen one at such close quarters before! It was great to have the chance to concentrate so wholly on the woodland for a couple of hours, cars and planes distant humming on the horizon that we somehow filtered out despite being in London, watching birds and 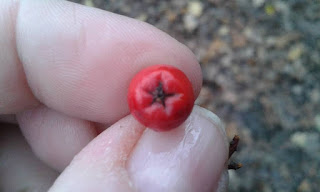 admiring the ingenious way nature survives, despite us!
I'll leave you with one last photo of a Rowan berry's underbelly, a perfect pentagram or five pointed star, which is apparently on all Rowan berries and coincidently apples - have you cut one in half horizontally? Just to take you back to Avalon - Isle of Apples! I came away with the added bounty of a pile of holly, mistletoe and a lump of the 'original' Yule log,  the Ash, gleaned by one of the gentleman who works as a groundsman and needed to trim the plants back to clear pathways. Let's see what I manage to do with before next week, all ready for Yule.

Have a Wonderful and Blessed Week x x