- May 17, 2015
Well another changeable week and I'm not just talking about the weather!  I've still felt like I have been  struggling to connect with Ker at this week and with hind sight I've realised that on several occassions I have rushed my morning rituals of grounding and calling Her in as I try to fit everthing into my busy day. Since then I have tried to take more time to devote to myself and talking with Ker and gradually I feel like I am reconnecting with Her, making the overused term 'quality time' and allowing myself to really feel the words that I am saying rather than just repeating words out of habit.
From my initial meditation journey last year, poppies and cornflowers have been a constant feature and by the end of this week the Wild Poppies have come into bloom on our allotment and these beautiful wild corn flowers that have self seeded in our front garden over the last few years burst into life - seemingly overnight. I took this to be a sign from Her that I am back on track!

On the allotment I have been trying to use Lunar Planting guides when planning when to plant seeds, bulbs and plants. There are lots of additonal factors such as the constellations that are thought to have a bearing on the growth but in the simplest terms the first quarter following the new moon is best for planting above ground crops that have their seeds outside of their fruit such as corn,grain, lettuce and brocolli, whereas the second quarter is good for above ground crops with their seeds in their fruits such as peppers, beans, peas and tomatoes.

After a full moon in the third quarter, energy is thought to drain down and this is thought best for root crops such as potatoes, carrots and onions. The final quarter is deemed best for maintainence work such as pruning, mowing etc as there is less growth due to lower gravitational pulls and less moonlight. It may seem crazy but it's likely that people planted and sowed their crops like this before the advent of modern calenders and weather forecasting. We'll have to see how they fare but they seem to be
﻿thriving at the moment -although these peas were being investgated by a rather large rabbit when we pulled up today! The apples are starting to form were the blossom has died off. 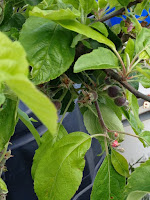 The Native Americans used a method known as the Three Sisters for planting corn, bean and squashes - part of their staple diet. This traditional method uses the corn to grow tall and proud, acting as a cane for the beans to entwine themselves round, whilst the squashes provide ground cover, detering weeds and luxuriating in the leafy undergrowth. These 'Three Sisters' or the Corn Maidens were revered by some tribes and are the sunject of much Goddess lore and mythology. Today we dug out another section to try this method, so I will be planting the corn later this week, the beans and squashes next week.

Whilst digging and weeding today I was humming and singing away asking Her to bless our little patch of land, if I'm feeling brave next time, I might take my drum and maracas to accompany my chants and invocations. 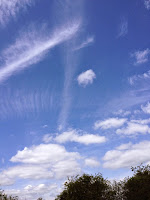 As we are in the far corner, we really do have peace and quiet on our little patch, something that I relish when I've had a busy week. Last week I heard the cuckoo's song, as well as hundreds of other calls that I don't recognise, as well as the drone of insects and an odd bubbling coming from the compost heap, especially after adding some manure and water today. There were some very strange clouds today - the picture to the left doesn't really do them justice but the horizontal ones in the centre looked like the feathers of a huge bird in flight - or maybe I'd just been out in the sun too long!

If you haven't already please feel free to join me on my facebook page:
https://www.facebook.com/#!/walkingwithmygoddess?fref=ts

Have a Blessed Week