I hope however you marked the great union of the Goddess and The Green Man it was a celebration. As we both had work the following day and to be honest the thought of getting up super early to watch May Day dawn midweek was not a joyous one, ok we were feeling lazy - we had a Beltane Eve fire and a little ritual in our garden, burying offerings for the Goddess and the Green Man along with a list of our personal aims and achievements to come to fruition and planted some mint that I had impulse purchased on the way home whilst looking at fire pits.....  Quite random I thought until I researched and and found that simple garden mint  has the spiritual attributes of inner truth and focus, journeying and your personal path as well as focus and clarity. Pretty apt then, coupled with the fact that it's a prolific grower. Let's hope it liked pizza and cider too!


You'll be pleased to know that less lazy pagan celebrations were indulged in this weekend when along with a group of lovely Moon Circle ladies, I headed over to Rochester for the annual Sweeps Festival - held every May Bank Holiday weekend. Historically the chimney sweeps, mainly young boys had just one day off a year on May day, resulting in sweeps parades and festivals country wide combining with old May Day customs and traditions such as the Maypole, May Queen and Jack in the Green. The Climbing Boys Act of 1868 finally ended this child labour for children under the age of 14, which meant that in time the Sweeps parades and festivals faded out. This parade was brought back 38 years ago and is still going strong. 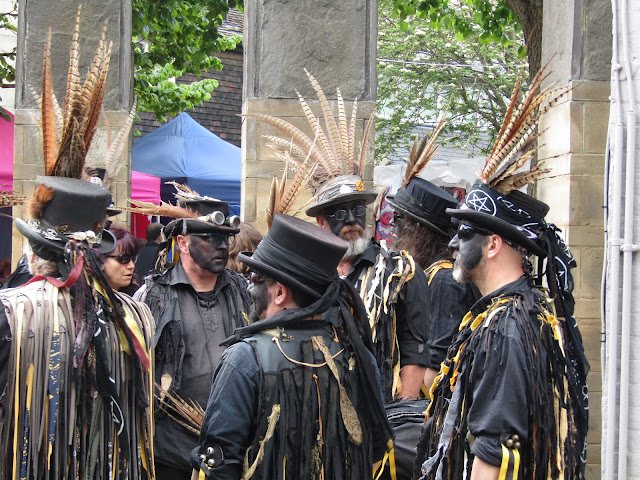 Some serious Morris going on...

There were sweeps costumes a plenty, steam punk costumes, hair garlands and pagan folk of all variety - quote of the day was my friend Olwen's "I know that Wizard!" as well as morris dancers galore, who braved the cold temperatures and dark skies in dance-offs throughout the city, their commitment only waning when the hail came when they all scarpered quite wisely to the take cover in some of many pubs!

As I said it hailed, and then some. We weren't sure if it was actually snow at one point, like the good pagans we are we took refuge in well, the Cathedral (you thought I was going to say pub didn't you?!) There has been a place of worship here since 604 AD and probably a place of pagan worship long before that. The high Altar has a beautiful zodiac tile floor restored in 1870 but they are copies of the medieval ones that were there...


Once the hail stopped and we ventured outside another friend showed us this Sheela-na-gig on the main entrance of the Cathedral, sadly like a masonic labiaplasty the lips have been filed away (ouch) and there is no hint of a vulva so it's a more modest and tame version and certainly not as out there and 'cop a look at this!' as some I some I have seen, but one nonetheless complete with an ear of corn signifying fertility and ripeness in pride of place. Again as much as I like the thought of a cheeky mason who follows the Old Ways designing this as a fiesty rebellion, it has obviously been included as a nod to the beliefs and customs of the people. Must have raised a few eyebrows and pulses though! 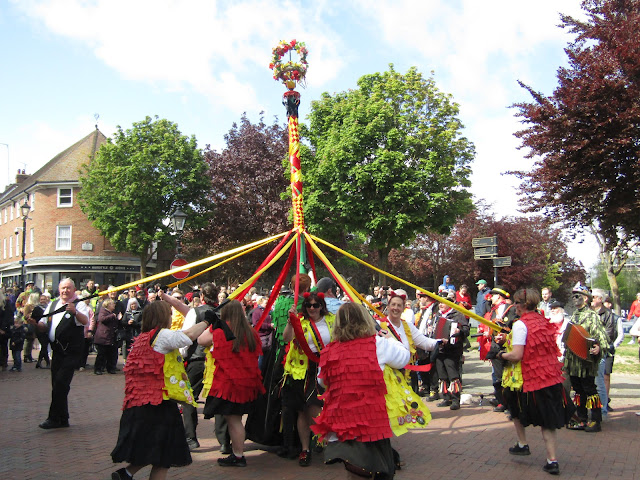 After exploring the city walls we came across the Maypole dancing - the ancient mayday fertility ritual and tradition that was first documented* in the UK in the mid 14th century but is believed to pre date this by many centuries. All in all, a fantastic blend of old traditions, cultures and beliefs, topped off with a visit to an amazing crystal shop called I Dig Dinos!  That's enough celebration for me, thank the Goddess it's a bank holiday and I can have a lazy pyjama day today!

Have A Blessed Week x x