- January 26, 2019
Well, guess who's just finally stirred their wintry bones and crawled out from their winter Goddess cave! Hair matted,yawning and  blinking in the light .
There's a bit of a habit forming here isn't there? The same thing happened last year, both unintentionally, but I do feel this year's wintery sabbatical was with more intention and purpose. This winter I have explored my darkness with a degree of relish hitherto unknown. Sounds exotic, dark and mysterious doesn't? Summoning the forces from hell from a witches fire? Dancing naked and muttering unmentionable evils?


Hmm, well you know what - I guess in a way, that's what I was doing; Early nights, pyjamas, reading, journalling, meditating, journeying and being creative, but focussing more on my dark self, my fears, my dislikes, my issues, my less positive traits - all very popular at the moment, I'm such a trend setter. Last year I learnt the lesson that sitting with and walking with my darkness was good for me, scary, emotional and at times unpleasant but also rewarding and satisfying. Truly identifying and acknowledging our 'faults and flaws' as we have been  conditioned to perceive them as parts of us to nurture and love, maybe even as  wounds to heal, not with shame and criticism but with understanding and tenderness. Acknowledging honestly that little jealous flash that fires through me whenever someone else achieves something I want to do, listening to what it tells me, sitting with it and unravelling the hot bubbling green mess that hides the root, the fear of running out of time and inspiration to finish my own projects, the fear of failing so paralysing that it prevents me trying at times. So yes, wrestling with demons and indeed muttering unmentionables!

Mercifully demon wrestling hasn't been my full time occupation over the winter months, Oh no. Much merriment was had throughout the Solstice/Yule period. I was surrounded by friends and family throughout, a beautiful simple Yule feast complete with our ritual of fir cone intentions thrown into the Yule fire, though not as much prosecco was consumed as the year before, which was a bonus the following day.

A side splitting day of laughter on 'family day' with all the extended family, the highlights of witch included my Dad dressed as Father Christmas dishing out the family Secret Santa presents from the massive Santa's Sack I concocted from an old brown curtain, yes we giggled like teenagers at that too!
It reminded me of a children's Christmas  party at Dad's work when we were both just still at junior school, my brother and I stood in line waiting for Santa who was late, we had picked up that there was some sort of hoo har going on. As we stood there it was with a shocked horror that we realised that we recognised the way Santa was walking and 'Ho Ho Ho -ing' at us all. Yep Dad had stepped in at the last moment, we managed to hiss 'It's Dad!' too each other before we collapsed laughing!

As I had promised myself, I made all my presents this year, which involved many late evenings humming and muttering to myself making up presents for everyone. This doesn't sound especially dark and it certainly wasn't an awful labour of love, but it did involve putting my trust in myself and my skills that I could take this challenge on and that my offerings would be good enough to gift to people.
Undeterred, I set out with a long list of ideas and closeted myself away trusting myself and my moderate skills making soaps, bath milk, bath bombs, candles, sugar scrubs, wines, liqueurs, meat rubs, pickles, chutneys,salts, beard oil, bottle lights, mason jar lamps, even a set of runes complete with a homemade pouch for them for himself.
Even as I gave them out I was waiting with baited breath as they were opened. I really need not have worried. There were genuine gasps aplenty from everyone accompanied with 'you MADE this?'

Claire and trusting instincts one;
negative nagging thoughts and doubts zero.
I'd thought about doing this for several years but I kept changing my mind. Just goes to show what negativity we can impose on ourselves without realising our actions, that darkness can weave into the smallest of spaces, but I found working with it, sitting with it and showing it love works wonders.
Start small and build up. After years of being non musical, I impulse bought myself a tin whistle, Ok so far my greatest achievement is 'let it go' from Frozen - I'm essentially a 47 year old kid with a recorder, think of my poor husband, but rather than being musically challenged, I shall soon be like the pied piper of the tin whistle as i venture out and roam the land, enticing even more cats back to the cottage -  Now there's a thought! 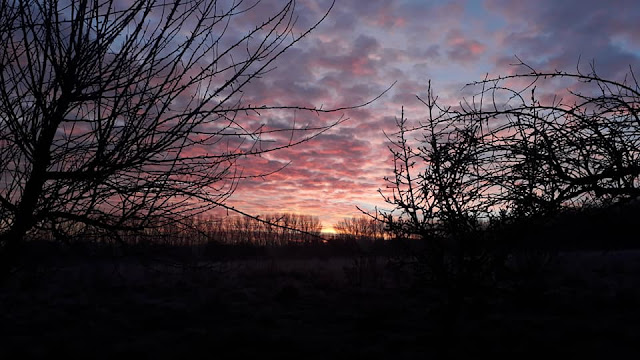 As always the darkness is followed by the light, I caught this beautiful sunrise in the mist and frost this week, I feel the fires of Brigid and Imbolc draw nearer, Goddess and her lands are  slowly stretching, flexing and starting to weave their spring magic. Time for me too to stir and walk from the winter darkness into the spring and to the light.


Have a A Blessed Week x x