The Legend Of Fred the Bat and The Unbalanced Chakra....

Anyone heard the story of this wondrous tale before? No? Well that's a shocker!

Enter stage left, a certain Goddess loving blogger, all organised and packed ready to explore the woodland charms of Walmer with Folkestone Pagan Circle for their Summer Camp. As she ventured dreamily into her garden all Disney Snow White-Like, singing softly to herself, gathering lemon balm, honeysuckle and hyssop for the smudge stick making craft session she would be lovingly facilitating later (I know they are becoming an obsession) she stopped in horror at the fearsome sight under the gazebo and cried in terror to her handsome luminous yellow Hi-Vis clad warrior -"Mark !! Those bloody cats have left a half mauled bat on the grass." Cue Screeching sounds as fairy tale fades out of focus.

Closer inspection by himself before dashing off to work revealed the bat to be completely un-mauled, just tiny and sadly, very dead. Now I was in a quandary, I too needed to move fast, curious cats were watching the scene with interest. Stood there with my arms full of fragrant foliage, I realised the ground was too hard to dig a hole, unprepared to merely toss this furry gorgeousness in the bin or leave him for the cats to play with, putting him in the freezer until I returned would just freak himself out - the thought popped into my head, I know I'll take it work to show Janine....
Now my friend and colleague Janine, I hasten to add is not a bat whisperer or worshipper as far as I know, but I had to show her! She and many other colleagues were delighted at the chance to view this beautiful creature at close hand. Not too close, gloves are necessary as they can have rabies but you know what I mean!

So  that's how it came to pass that Fred as he became known - yes as in Drop Dead Fred, lay in state in a tissue box  - a visiting colleague admiring Fred, my desk crystal and witches salt remarked that it was better than being at Hogwarts. When I left on my journey to Walmer, Fred came with me.


The Fire Wheel and Fred's Ceremony

Again we opened another circle, singing, drumming, more admiring small children and some curious (make that alarmed) parents watching us too. After marshmallows were consumed, we gently placed Fred in his box on the fire and surrounded him with a fire wheel we had made of foliage, flowers and herbs with wishes to send to the Goddess, Gods, Universe and sang a wonderful song called 'Fire Transform Me' that we had learnt the night before. As we sang, I looked up through the gap in the trees above the fire pit and to my utter amazement there were about 12 bats circling. You couldn't make it up! It was amazing and utterly magical. We all stared in total awe. There really is no other word to describe it other than magical. It gave me and everyone else too  goosebumps. 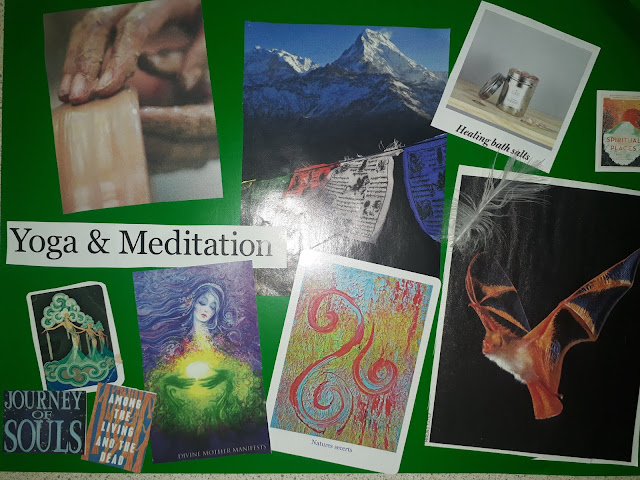 My Vision Board - Spot The Bat

On the last morning, our final activity with the lovely Jen was a vision board workshop. Sitting chatting we selected images and words that reflected our wishes, goals and dreams, some obvious, some more secret and some surprising - all with the intention of manifesting these things to happen - by focusing and prioritising. Simple yet powerful and effective. As you can see from mine above Fred was important, sounds silly but I needed to know more about bats. The words and pictures include my interest in working with the living and the dead, walking between them, supporting people on their journeys, grounding myself and relaxing more and  trying pottery - something I've always wanted to do. Jen's advice to have it as your phone and laptop screensavers is powerful. You see it several times a day, you make plans, you do something towards it....

So Tourmaline - no surprise there that it's for grounding and rooting, healing, balance and rejuvenation. As for Bats, well dear old Fred  is symbolic of life and death, healing and new doors opening, of rebirth , journeying and communication His kin magically coming to see him onto his next journey was so symbolic for me. Soul Midwife Course ...  booked.
So now you've read The Legend of Fred and The Unbalanced Chakra.

Now didn't I say rebirth? When I got to work the following week, my lovely friend and colleague Pete has a little surprise present for me... Here it is enjoying the sun in my tomatoes last week. Pete's face when he reads about the bats will have been a picture! Thank You x 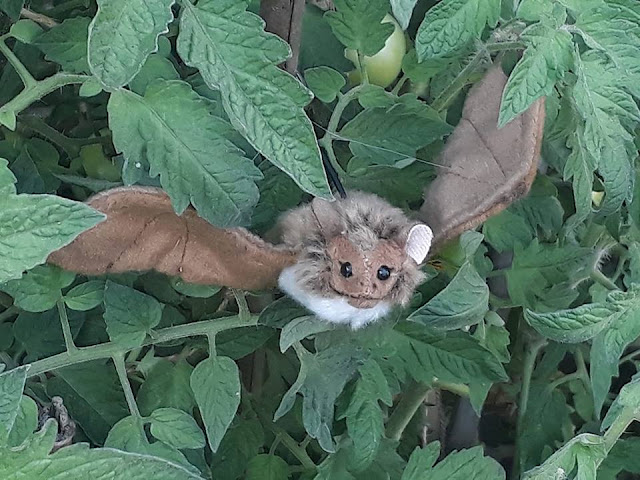 Have  A Blessed Lammas x x