Voices From The Past

- October 29, 2017
So Samhain approaches, the veil thins, the ancestors draw near. In eerie early morning mists we catch sight of lingering spirits perhaps, peer fretfully as the last rays of the sun slipping away earlier and earlier, painting the sky a myriad of moody orange or blood red and try to ignore twilight shadows that hover on the edge of our vision... I love it! Up early one morning in the week, I ran a steaming bath and lay there watching with the light of a lone candle as the steam spiraled lazily out of the window, silently and slowly battling the mist that was endeavouring to seep in, snakelike against a  grey skyline that changed gradually from steel to silver. Relishing the warmth of the bath, I watched as they duelled together, envisaging that ancient spirits were rising from their rest and seeking us out. A bit fanciful but you get the idea! The sunsets have been spectacular too, this one below from last week... 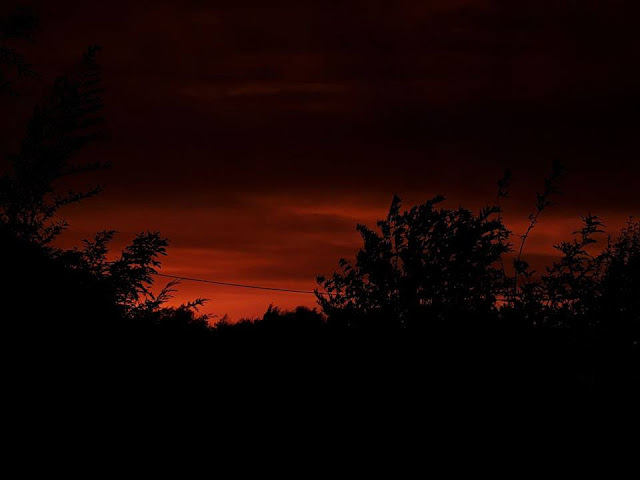 Our trip away was feast of ancient sites, all beautiful and breathtaking. All full of whispered voices from millennia past, waiting to tell their stories in a quiet corner if you just sit quietly with them long enough. Well that was the fantasy - a quiet commune with the ancient ones, a spot of meditation - you get the picture. They must have been wetting themselves laughing or rolling on the floor in hysterics at my spiritual aspirations and delusions. Skara Brae, the mere name of the place conjured up spiritual and ancestral wonders. I couldn't wait to get to this pinnacle of ancient culture to connect and communicate. Yeah right.... Pure pandemonium - no other words for it! A massive cruise ship had docked and pretty much all the 5000 passengers were doing a whistle stop tour of Orkney... how very dare they, it's not like I was a tourist myself - oh wait, yep that would be me too!
Mercifully what I hadn't realised despite knowing that this ancient site had been covered by a sand dune until a storm in 1850, I hadn't made the connection that it was so close to the sea. What an amazing place. 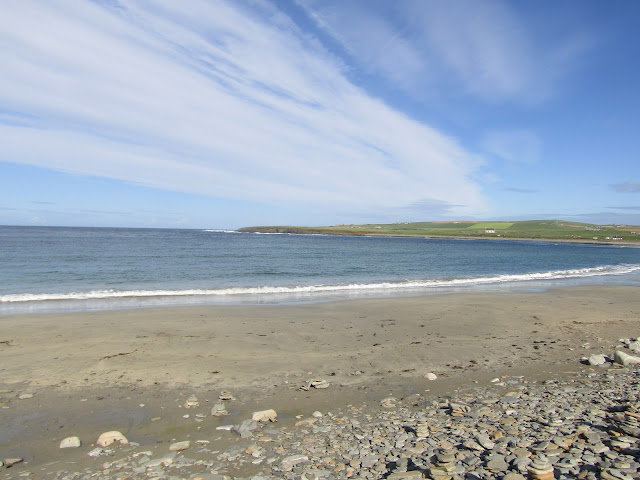 The beautiful beach adjacent to the 5000 year old site, quiet and available for peace seeking tourists who wish to commune with the ancient ones without the hordes... of which I of course became part of half an hour later! It was atmosphere on the beach however that allowed me to picture ancient settlers fishing and collecting rocks for their expanding community, splashing in the sea, running up the beach and speaking a language long forgotten. 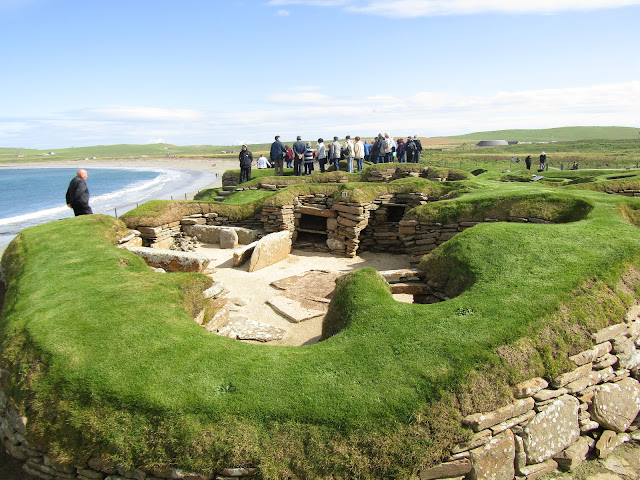 What a beautiful, beautiful place.A fascinating glimpse into the homes of ancient settlers, maybe even those who migrated south to work on the building of Stonehenge years later.

Somewhere that was far less busy, less anticipated by me was the island of Hoy. I think the key is in the word anticipation. I'd vaguely heard of it and hadn't planned to visit but on a whim we took the car ferry over to walk out to  a sea stack called the Old Man of Hoy - just the 5.5 miles - good job himself loves me. From the lonely road to the cliffs we, well I saw what looked like a grave and a tourist information board. I think poor Mark has developed a phobia of these brown signs - you know the tourist ones that mark obscure things like pencil museums or a rock that someone once hid behind - you know the type? Anyway humouring me he pulled over and I was off, like an escapee out of the car and up the path to investigate like a curious blood hound - just like my Dad.
What a sad place, a lonely grave on a wild moor, the wind whipping my hair around me and whistling the mournful story through my ears. 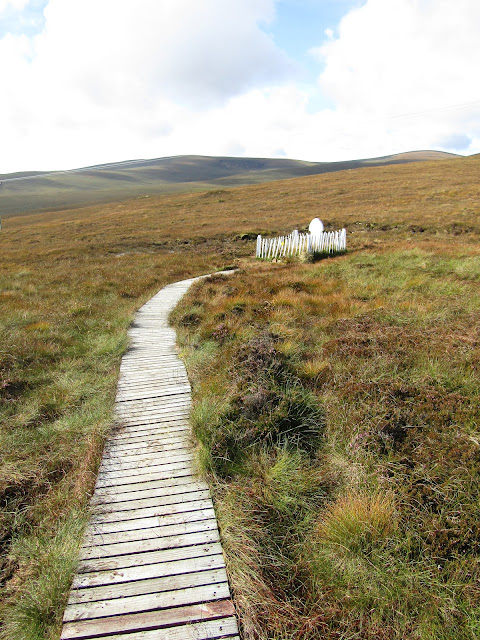 In the 1770s a local woman named Betty Corrigall had discovered she was pregnant, her lover, a sailor abandoned her and the devastated Betty shamed and shunned by her family and community attempted to drown herself but was thwarted in her efforts. Days later she hung herself, her suicide so ungodly that was crudely and hurriedly buried in a box in this unmarked grave on unconsecrated ground, legend has it with her noose beside her. In 1933 two peat diggers found her coffin and curious locals gathered hopefully in case the box contained treasure. To their amazement Betty was preserved by the peat, her long dark curls still encircling her shoulders. Betty was hastily reburied - at least in a coffin this time and she would have remain unmarked and unmourned had it not been for the second world war, when soldiers digging the moor for peat rediscovered her coffin and dubbed her the Lady of Hoy before filling the peat back over her. 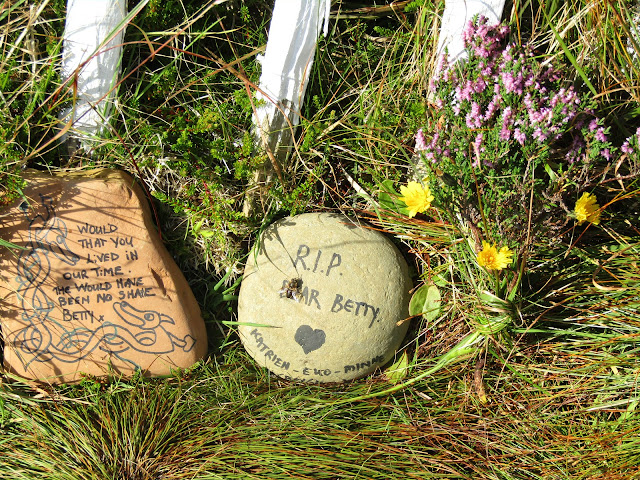 Sadly this still wasn't the final deserved rest for Betty, word spread of the mysterious Lady of Hoy and curious soldiers went on late night forays and dug her coffin up several more times resulting in her body deteriorating badly. Mercifully, peace was finally found for poor tortured Betty when this came to the notice of the Officers who arranged for her to reburied and a massive slab placed over the coffin to prevent any further exhumation. In 1949 a visiting minister placed a small cross on the grave and erected a small fence around it, it took nearly 30 more years to get a headstone erected for Betty and a small service held at the grave. Simple, spontaneous tributes lie around the sparse grave, so very poignant and touching that it brought tears to my eyes and made my heart sore. I collected some heather and dandelions, tied it together with grass and left it by these stones. 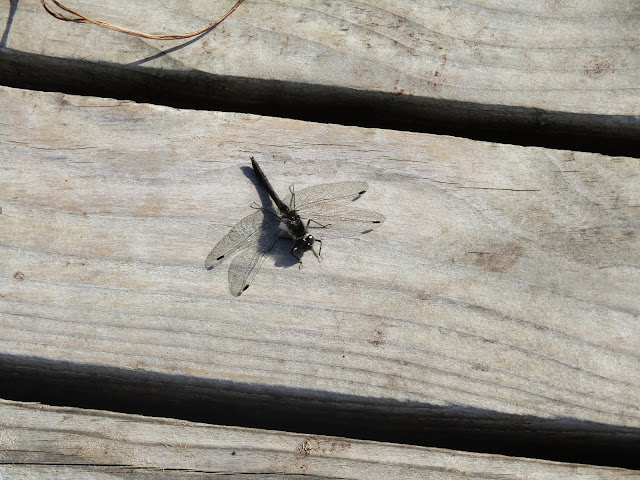 I sat on the board walk across the boggy ground in quiet contemplation and felt instantly drawn to Betty, her wild wailing grief, her pain, feeling the weight of the horror and indignity that abused her over the centuries. I was joined by this beautiful dragonfly just inches away from me, affirming for me the connection between the worlds, greater understanding and rejuvenation - a feeling of peace for Betty's spirit. Mark could see the dragonfly from the car it stayed so long.

So that may sound like a bizarre little tale for my pre Samhain blog, indeed it is a sad story, one of a haunted tortured woman, whose brief love affair cost her everything including her life and her soul, who was then haunted by anonymity for a century and a half, then haunted by morbid curiosity until recently. However I like to think that Betty has finally flown free. Betty is no longer unmourned, many people must stroll up to the lonely grave and stay a while like I did, then tell their friends and keep Betty's memory safe in their hearts like I did. Betty left no descendants, so this Samhain when the veil is thin, when I remember my loved ones, venerate my ancestors, visit them like I did today, celebrate them and maybe talk to them, I will honour her spirit too and light a candle for her. Her voice though distant has been heard.