- May 30, 2017
It wasn't a great week last week was it? I woke up early on Tuesday still feeling like utter poop, it had been brewing over the weekend but it had arrived and settled in with a vengeance. Groaning and reaching for my phone to ring my manager to say I wouldn't be in again (a pretty much an unheard of situation) I caught the early morning headlines and read with horror the events of the previous night in Manchester. As the awfulness of it began to filter through, emotions of anger and despair rushing through me for lives lost to hatred, tears in my eyes and heart in my throat, I suddenly thought of my little cousin who studies at Manchester Met, she was highly unlikely to be at the concert but you never know quite where life takes people. I checked my messenger contacts and with relief saw she was active on line and replied to my message immediately, wondering what I was talking about.

Heartfelt relief and gratitude for us, sadly not the case for everyone. Sounds a bit dramatic maybe, but the fear was real and touched a nerve even though it was just brief and fleeting, it hit home more than ever before.
I don't usually comment on what is happening in the world on here, sure I read about it, think about it, worry for the future and do what I can in my own small way in my little bit of the world. I'm no politician or stateswoman but I do know that this is not about religion and faith, it's about hatred, fear, division and all that is dark in our world. What I also know, is that the love, compassion, selflessness, the desire to help others and kindness of the majority shone through, breathing a little much needed light into a very dark day - Muslim (and a whole variety of other faith) taxi drivers giving free lifts all night to get people home, Rabbi's delivering coffee to frazzled Police officers, pubs and hotels offering shelter to those who were stranded and those two homeless guys who have nothing at all, but ran towards the chaos to offer any comfort they could to those who needed it, a lady who sadly died in their arms. That's what human nature is ultimately about, that's who we are, mirrored in all those beautiful souls, those who put others first when they have needed them most and didn't allow gender, faith, religion or race to divide us; that's what we need to keep alight and alive in our hearts and souls, even when it seems no one else is, because they are - they may just need another light to shine with them.

More practice walks for the nearly here Marathon walk took me out and about again this week, tackling the circular 13 mile route around a nearby reservoir Bewl Water, I knew about that the next day I can tell you! As I started the walk, the clouds grew menacingly dark and before long I could hear the rumbles of thunder and see the distant flashes lightning - counting the distant between the two to measure the distance like I did as a child, just what I wanted to hear as I walked through the woodland! Laughing to myself and thanking Goddess for the cleansing storm and praying that the lightning didn't hit me as strode with purpose, I think we can qualify it as a coddiwomple to be honest, I had a vague map, hadn't a clue where I was heading but knew it would end up back where I started at some point.
Which thankfully I did just over 4 hours and a wide variety of dog walkers, ramblers, joggers, runners and cyclists later. Everyone was cheery, waving walking sticks, exchanging hellos - even the sweaty puffed out joggers and runners who caught me unawares  a streak of neon pink or green as I communed with nature, huffed and puffed to my Goddess about my sanity and my clicking hip in between revelling in the beauty around me and probably looking a little disturbed as I practised a short talk I am giving in a few weeks about some local neolithic stones -  bumbling along, choosing the right words and delivering choice pithy sentences to trees and bushes as I went. They appreciated it I'm sure, just like the cyclists who after silently sneaking up on me, patiently waited for me as I extolled the migratory habits of 4000 BCE mammoths and reindeer to my invisible audience of Dryads and wood nymphs, nodding politely when I realised and explained I was practicing a talk for a summer solstice camp, even asking what it was about. I explained, they didn't run and  they even said they'd pay the stones a visit next time they were that way....
Rewarding myself with an ice cream as I got back to the visitors centre, flopped into the car and pulled my walking boots off, I found a text from a beloved friend who turned out to be a distant cousin a few years ago, well she always was but we just didn't know. Originally from the same village as me, after being an uber babysitter for several years, she met her husband, moved to Leicester, settled down and now has 4 gorgeous children of her own.
A last minute Bank Holiday caravan trip to the Kentish coast for them meant a chance for us to catch up, and a couple of hours later after I had soaked away my aches and pains in the bath we tracked them down at a beach about an hour away. They hadn't told the children that we were coming, and to watch them realise who their parents were talking to, to see such amazing little people discard buckets, spades, sandcastle, forts and moats with delight and run up the beach to envelop me in glorious wet and sandy hugs was a beautiful and wondrous thing. Exactly the sort of thing that makes your soul sing again. Helping dig a moat, build castles, collect shells, look for hag stones, stopping punch ups and swimming in the sea (yes really !) were the main components of the next few 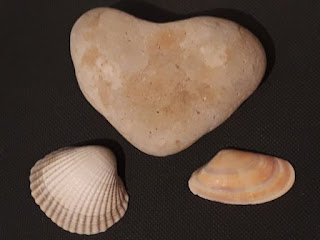 precious hours. I came away with some glorious booty, a shell each from the boys Tyler and Ashton, a beautiful heart shaped stone from my Emily who has a wild heart very like my own and sand from Lucy the baby of the family - all in my shoes, thanks Bubba!
All given, knowing it would go on my dresser with my other 'special stuff' and that's exactly where it is.
Treasured and loved.

Have a Blessed Week and Remember Love x x