- June 17, 2016
The last few weeks seem to have been all about journeys for me, spiritually, mentally as well as physically.
On several levels I have felt as though I have moved along my path significantly. Whether that is because on the most basic level I am exploring and writing about the wheel of the year again, perhaps with more clarity and understanding than before, as well as the fact that people have sought me out to ask me questions about my journey, how to start theirs and for advice. I've become on occasion 'someone that will know' - not that I always do and neither do I claim to be an expert I hasten to add! It's as though I  have progressed to the next class up from beginners - with that comes confidence to trust my own instincts, to listen to my inner voice and the knowledge that what I do is right for me but also carries the weight of responsibility and need for wisdom. I feel as though my learning curve has become instinctive now, a purely personal journey where I walk with Goddess.
Through listening to my own body and my reactions, as well as keeping a meditation journal I discovered many moons ago,(boom boom!) my meditations are usually much more vivid and powerful when the moon is waxing. It also increases my creativity, again adding to the vividness of my meditation journeys- ideas, thoughts floating into focus, that mother line of mine jostling to be heard  and I have been very conscious of the need to tell lost stories, obviously in my own way and a little poetic licence for fiction! I've always loved tales of myth and legend, believing that is probably a grain of truth somewhere in them, this week I have been happily scribbling away, characters developing, plots unfolding fast and furiously to the point where I have had to implement a project book just to note down ideas, as well as making a serious start to planning some more serious and accurate research for other projects  - I won't have time to go to work at this rate!
This week we headed off to Manchester for a concert and stayed with some family nearby which allowed us to explore a bit of Derbyshire and the Peak District, reluctantly Mark let me navigate unsupervised without the satnav. He wasn't at all surprised when we pulled up outside a pub called the Druid's Inn and I told him there was a cave behind known as the Druid's Cave that I wanted to explore... Walking boots on, we went off to explore and found a series of small caves that would have been habitable if a bit precarious!
Hidden from the road and in a high out crop of rock it's easy to see where the legend came from - there's even carved steps and a rock with a dip in that could act a bathing pool! A bit 'girlie' for a druid/hermit maybe?
This cave entrance was very feminine in form, if not positively yoni like! It got me wondering just who had lived their before the legendary Druid or Hermit, you can see why it would be a special place for anyone, Goddesses too!.
Bravely and against his better judgement, himself continued to let me navigate off piste - (very rare) this time I steered us to Stanton Moor for a 'short walk' as I misinformed him, to find a stone circle known as the 9 Ladies. legend has it that 10 women were turned to stone for dancing on the Sabbath....one stone fell flat so hence the name now!

Hmmm, seeing as they are 4000 years old we can discount that myth, the information said that funerary and ceremonial relics have been found and it has 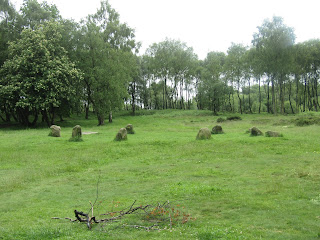 long been seen as a special place. Being me, I had to have a little weave in and out of the stones and touch them as I went, some seeming warmer to the touch than others. So quiet there apart from the odd marauding dog, straying away from their owners to check out our packed lunches! I fancied that the tress looked like dancers poised in a tableaux, the odd sway in the wind looking like a discreet lack of balance! Me and my ideas.... Walking back to the car I could almost hear whispered voices and we both heard what we thought were hooves clip clopping on the ground but there were none to be seen, just a few shy sheep a little further along the track. it would Remote and secluded it must have been a wonderful place for a ceremony or ritual  for something special or sacred, I suspect it still is! 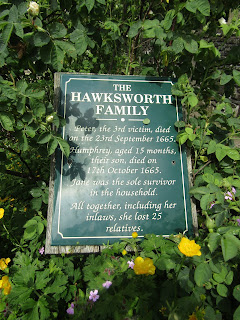 My good luck with full control of the navigation continued and on the way back yesterday, I managed to sneak in a few more detours. First we went to Eyam, a small village up in the Dales that had the misfortune in 1665 of being in receipt of a parcel of cloth for the village tailor that was infested with fleas from plague ridden London, what followed was inevitable. Their courage though was exceptional, they barricaded themselves in, quarantining the village - a act which cost them three quarters of the population of the village, but prevented the plague spreading anywhere else. Entire families wiped out in days and weeks, or decimated so that just one member survived. Despite the grimness the stories fascinated with me, a fantastic museum has preserved their memory and celebrates their bravery, their names are real, especially as you walk through the beautiful village and the houses that these people lived in are signposted. One lady in particular kept replaying in my mind all the way home, I think her story will be one I will have to tell in depth - yet another set of scribbled ideas in my project book. When I asked  Goddess for inspiration, I was thinking creativity in making up a story, what I've been given are facts and stories that inspire creativity, I can work with that!
Also found a slightly shortened but otherwise fabulous Celtic Cross, dated 8th/9th Century in the church yard that appealed to me, no one knows how long it's been there or where it was previous to the building of the church. The front had the normal Celtic knots on it but the back was covered in odd shapes that almost look like cornucopias with long strands of foliage coming out of them.  Finally the satnav was wheeled out for the sake of himself's sanity, but bless it, our route took us past a sign to a village nearby called Cressbrook.. Now researching any mention of Ker all over the UK  and the world as I have, Ker and cress have been linked, it's even suggested that cress that commonly grows around a well is a derivative of Ker, this could mean only one course of action... Driving into Cressbrook I discovered it was their one week of the year to have their well dressed, most of the others are in July - now just what are the odds of that?!
A brief pit stop had me running down a grassy bank to find this beauty on the village green! Not Ker of course, but the Green Man, Old Cerrunus himself - rather an odd choice for the fund this year for the village church! Next to it they had a  standing stone about four feet tall to mark the millennium, which I thought was a lovely idea - I wonder if people will look at it in a few hundred years and wondered if we danced round it?
Safely belted and locked in the car, satnav firmly on, we headed off on the long journey home my head full of sights and stories that need ruminating and meditating on to bring them alive once more.
Full moon is also Summer Solstice which I will be celebrating in a variety of ways that involves a lot of camping, singing, dancing, drumming and hopefully not too much rain!


Have a Wonderful Solstice or Litha However You Celebrate. Blessed Be x x