I don't know if any of you remember my little 7 day connect to the Goddess challenge I set back in February? Well anyway, it created quite an interesting journey for me, and I promised a blog about it at some stage, so here we are!

So at the end of the little challenge, the final part was to do a short meditation journey, I ended up on a sunny river bank, watching a beautiful ethereal lady serenely paddle a boat towards me, both of us surrounded by kingfishers, which was all rather lovely and not at all what I was expecting. Maybe I was influenced by the colours I was wearing? Who knows, but I know enough to know a sign when it comes and bites me on the bum!

As you can imagine some  fervent googling and researching ensued. Now the only remote link I could find to the Goddess and Kingfishers, was Alcyone. In Greek mythology she and her husband Ceyx were mortals who angered the gods by daring to refer to each other as  Zeus and Hera, whilst Ceyx was out at sea, an enraged Zeus whipped up a storm (or a thunderbolt depending on your storyteller) and the boat was lost, Ceyx with it. Unaware, Alcyone continued to pray to Hera for her husband's safe return, only to discover that he had died - again either by his body being washed up or by a visit from Morpheus (God of dreams) disguised as Ceyx by way of a premonition. Either way a distraught Alcyone threw herself into the sea/river and was drowned.Now don't worry, I'm not about to be throwing myself into the Medway, I nearly drowned when I was 8 and that's enough for me, thank you very much! Anyway out of compassion (or guilt I reckon) Zeus turned them into kingfishers so that they could be together again, the Kingfisher's scientific family name is Alcedinidae, and the belted kingfisher's proper name is megaceryle alcyon.

So Halcyon Days means idyllic past days, memories of the golden days. Now that made me a bit sad to be honest, like all the best days have been had, wow, what if even most of the days have been had? That's how my brain was working, not surprisingly perhaps after a long year of serious health issues. Hmm. More googling required. Spiritually a Kingfisher can mean Love, Abundance and Prosperity, now that was more like it! Boldness, Courage and Peace? Why yes, I'll have me some of that thank you very much!

The name Alcyon was still nagging at me, where had I heard of her before? I was thinking the sky but perhaps that was just the Kingfishers flying? Finally I remembered, the Pleiades!

The Seven Sisters! No not the 'mountains' that I climbed on the South Coast, no one mention them to me ever, ever again!  These Seven Sisters were  Maia, Alcyone, Merope, Asterope, Calaeno, Taygete and Electra, daughters of Atlas, who holds up the earth for the Gods  and  Pleione - a sea nymph. There are many stories about them, a popular one being that because of their beauty they were pursued relentlessly by the hunter Orion and to protect them from his advances Zeus transformed them first into doves and then into stars to keep them safe. Personally, I'd have had a stern word with Orion first...

Ironically the Pleaides constellation is  a cluster of stars in Taurus, next to that of Orion, so he still pursues them across the night sky. What a sex pest. They are visible to the naked eye but it took me a while to find them.

I'd encountered these sisters before, when I did my celebrancy course, my tutor believe it or not was a lovely lady called River (just small connection!). We had to do a plant spirit/ally mediation, I connected to a red pimpernel, and that in turn connected me to Maia, the eldest of the Seven Sisters as She is the 'deity' connected with that humble plant, that was another amazing mediation and probably a whole blog in itself too, but this moment of serendipity really connected me to two of these sisters. Maia is connected to the month of May - which is just days away and her name means among many other things, midwife, grandmother and wise one. If you make a happy accident of a connection with things, go with it, go with the flow, you're not mad, you are finding your own way and that above all is what I think Goddess wants us to do.

Just when I thought I'd finished with Alcyone, Maia and the Kingfishers for the time being, they re-joined me. Me and Himself had gone out for the day, to one of our favourite pub Restaurants at Dungeness - the Pilot, and stopped off on Romney Marsh to look at a few things, one of them being St Eanswythe Church at Brenzett as well as the local marsh visitors centre when they paid a surprise visit in separate art works.....

So as you can imagine that got me thinking again, about these Halcyon days and what it all means. The good old days? The best days are done? Look back with rose tinted glasses, and wallow in nostalgia? Certainly no harm revisiting them, those amazing days that we have enjoyed in the past. Just don't remain there. 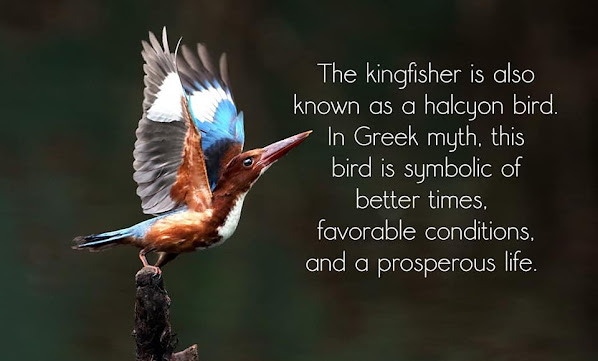 It's also the Good Times right now, The Prosperous Times, Better Times round the corner! Those ahead as well as those we've experienced. What if today and yesterday are tomorrow's Halcyon Days? Let's make the most of them!