- July 12, 2015
We've just come back from a beautiful couple of days in Norfolk, right by the beach just above Caister, in the unromantic sounding village of Scratby to be precise. Fortunately it was a lot nicer than it sounds- a beautiful unspoilt sandy beach, with the bare essentials of facilities and plenty of space. Apparently it's a Norse name- Skrauti meaning someone given to display* and 'by' meaning settlement - so now we know! (Sorry, I've always liked to know the wheres and whys!)
It was the first time I've been away for any length of time since I started my journey, so I had been wondering what to do about my altar - pack it up and take it with me or make a new one up there?
I decided to do the latter. So I dragged my long suffering husband  off and chose a quiet spot on the beach just as the sun was starting to set and we made a stack of flattish pebbles and simply surrounded it with two rings, one of white pebbles and one of blue. I did try with tea lights but it was a bit too windy, undeterred I grounded myself with the local elements and called Ker in as Kerah, adjusting my usual invocations for fruitful land and crops, to a fertile fish and sea life population and also a good catch or harvest for local fishermen.
I particularly liked this beach as there were dunes and sea grass and plants which looked gorgeous and helped me to feel I could tie it in with Ker as opposed to it solely being the preserve of watery or sea Goddesses.


Later in the week, on our last evening I went back to the same beach on my own and made a second altar this time a bit more ambitious - a spiral this time in the blue stone that was so readily available. A few people looked curiously as they walked past, but it was their dogs who came closer for a proper look, although once  I left, I looked down from the cliff and saw a few people wandering over to see what I had made and much to my delight took a photo before leaving it as it was.
Whilst  I was sitting there mulling over all the things that She had shown to me and shared with me that week,  I realised that I was drawing on a black stone with a bit of flint and whilst I'm not expecting any awards or an exhibition at the Tate any time soon, I had managed to carve/mark a symbol of Goddess on it. Originally I was going to leave it there but after a bit more contemplating and meditation, I asked Goddess for Her blessing to take it, a lovely piece of quartz and a few pretty pebbles I had found whilst searching for my spiral stones home with me to adorn my altars at home in my kitchen and in the garden. I bathed them in the sea one more time and thanked Her for Her gift.
Whilst driving about in Norfolk there were plenty of signs for windmills but unfortunately we were never really close enough to one for me to get a photo or it was absolutely bucketing down and the shot was too blurred which was a bit disappointing. However Ker's presence was all around me all the time, first on our trip up to Blakeney Point to go on a boat trip to see the seals, as we drove through field after field of barley, oats, corn and wheat and then again as we drove on to Walsingham as we headed to the shrine there.
We were just pulling out of a junction, amidst a blanket of fields when Mark pointed out this mural below, to me painted on the roadside of an empty looking house that was up for sale. Of course, I made him pull over so that I could have a look at it! I'm not entirely sure where we were - possibly between 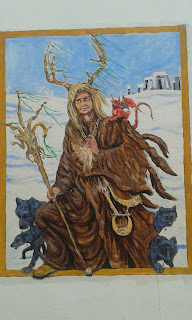 between Holt and Brinton and I'm equally unsure what it's of exactly but it certainly caught my eye! It looks like Stonehenge in the back ground but  I'm not sure if it's a man or a woman - opinion is mixed here.What is the importance of the dragon, black wolves and a horned headdress, the snow, a staff with a sheep or goat skull(and jesters symbol?) as well as the musical instruments - a horn and a lyre? Not to mention the glowing necklace! As you may have gathered it has totally enthralled me, if anyone has any clue at all I'd love to hear it! I'll try not to be disappointed when it turns out to be an art student's flight of fancy!

After that excitement we headed to Walsingham to see the shrine and the holy well, both of which were beautiful. I wanted to visit as I was interested to see how old the original well was, as I suspected that this had been there long before any Christian shrine and possibly had pagan, maybe even Goddess roots. Unfortunately it was raining so much that we didn't brave the Abbey Grounds so I only managed to see the 'newer' well at the actual shrine which according to the visitor centre, dates back about a thousand years ago. The original shrine was built after a local wealthy widow, Lady Richeldis de Faverches had 3 visions of the Virgin Mary telling her to reconstruct the stable where Christ was said to be born, before being lost in the reformation and finally restored last century. The atmosphere in the shrine was amazing, I was lucky enough to have it to myself for a while and distinctly felt that the there was a very strong energy mingling with the incense and the smell of the candles. With no wish to offend any Catholics or Anglicans who may be reading this, I couldn't help concluding that our travels in mediation journeys and signs we receive from Goddess now and such visions that women like Richeldis had were really one and the same thing, only seen through differently conditioned hearts and minds, ours having been reopened in latter years by Goddess.
It's a beautiful place to visit and I'm very glad that Richeldis was brave enough to push forward with her plans in such a male dominated era and build it, whoever she felt it was for. As I came out of the Shrine Chapel my eyes were pulled to a small plaque on the wall that said 'Glastonbury' - of course all the Abbeys that were at any point connected the shrine where there, but it was the one I saw first!
On the final  part of our journey home we stopped in Essex at Manningtree to have some lunch and then drove through Mistley as well. I had a headache when we getting close that didn't lift until we had left. We sat by the river as we had our lunch and I couldn't help but think of all the women who had lost their lives in the campaign of terror - the Witch Trials of Essex, Suffolk and as far as Norfolk in the mid 17th century, led by Matthew Hopkins. I was angry and sad for these women, who were in the main innocent of any crime other than being old, having cats or being healers or midwives, anyone following our paths would have been instantly guilty. I said a silent prayer for them as we sat overlooking the River Stour, a tidal estuary of boats forlornly marooned on mudflats and wondered if some of the local women managed to row or swim their way to safety before being captured. I hope so. It feels like there is a story in there somewhere!
So, back to Kent and back to work, and I'm sure there's plenty to do on the allotment this week, just to keep me busy.