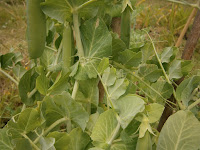 I hope everyone has found a little time to enjoy the sunshine and festivals this week.
I managed to spend most of this morning on our allotment, it feels like the weeds are enjoying the mix of sun and rain nearly as much as the crops, but at least the peas are flourishing and looking yummy, bringing back memories of shelling the peas from Dad's veg plot with Mum and eating more raw ones than we put in the saucepan!
Although the original beans I planted have been 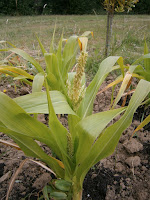 rather munched, the ones the I planted in my 'three sisters' bed seem to be faring a bit better and they are starting to find their way to the corn plant now for support. Once they grow a little more, I'm going to plant a variety of squashes as well as marrows and courgettes underneath them both from a local nursery called Bumbles (what a lovely name!) where I bought the corn plants for just a pound and we'll see what grows best and what appears to be most resistant to insects, birds and rabbits. In my herb section my garden mint mint has grown enough for me to take a handful to flavour some new potatoes for tea and I'm keeping a close eye on the lavender as I want to pick it at it's best to dry to use to make some goodies from my lovely book that was a birthday present. 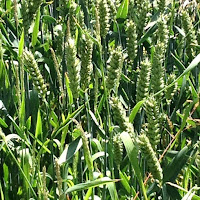 It's been a week of travelling -  in more ways than one! Work has taken me all over my county by the the most unexpected paths. Instead of going on the main roads, I decided to trust my intuition, grab my trusty map and relied on road signs and signposts get me from A to B (although I must admit the sat nav was lurking in the glove box, just in case...) I was rewarded with a glorious journey through fields and woodland, I felt like a tourist, or a child even - viewing things for the first time. It felt as though Ker was calling to me as I drove through fields of wheat, barley and  past orchards - the fertile belly of Her land. It was a good job there wasn't much traffic as I kept slowing down to take it all in and a couple of times made cheeky pit stops to take a few photos. It put me in mind of a beautiful and apt poem, one of my favourites,
'Leisure' by William Henry Davies: 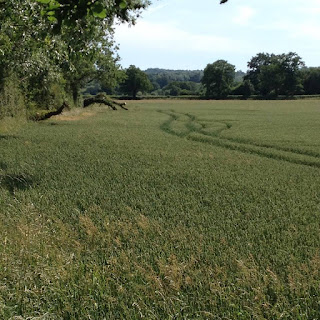 No time to see, when woods we pass
Where squirrels hide their nuts in grass.
No time to see, in broad daylight,
Streams full of stars, like skies at night.

No time to turn at Beauty's glance,
And watch her feet, how they can dance.
No time to wait till her mouth can
Enrich that smile her eyes began.

A poor life this if, full of care,
We have no time to stand and stare. 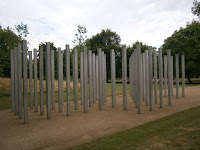 Despite living on London's doorstep so to speak, we rarely venture into the capital, rather we go round it via a multitude of tarmac. On Friday I was lucky enough to go to Hyde Park to watch The Who, Paul Weller and lots of other
artists performing in concert. As we walked through the park, I was struck by this curious installation. Taking my cue from the poem, I stopped  to investigate and discovered that it's a memorial to the those who lost their lives in the July 7th bombings in London nearly 10 years ago. Initially I thought it was rather an odd 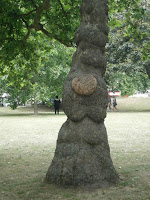 choice for a memorial, but after I walked through them, it felt like a forest of memories planted for them all in a beautiful woodland setting, made of tough concrete to symbolise strength and longevity.  After all we mark graves with stones and there are plenty of standing stones and menhirs erected millennia ago to mark and commemorate all sorts of things. just as I had finished musing and still felt I would need something more natural if it was my choice, I turned and found Goddess watching me in the trees, literally, reminding me that as always She is in everything in and on her land. The concert was amazing - accompanied by the most amazing sunset. 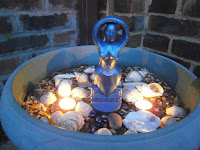 The fullness of the moon over the last week has, as I expected meant some deep meditation journeys for me. I've spent most evenings this week in the garden watching the moon with candles lit on my outdoor altar.
Twice whilst meditating I visited a cottage where there was a spinning wheel in the corner, a roaring hearth with either a cauldron or cooking pot over it. 'We' were collecting dried herbs from the rafters and mixing them together to make a potion or poultice of some kind, we were expecting a visitor and the curtain at the door opened to a young woman. I also felt a sense of being old, really old and had the oddest feeling that I was looking at myself. I also felt an odd rushing and could see a much older but more modern day (future?) version of myself talking to a younger woman in a uniform, possibly a nurse or carer. Interesting!
Yesterday morning  I was laying in the sun with

George, my oldest cat, he nearly always finds me and curls up next me when I meditate, this time I went to the cottage again, but it very high up, almost on a high cliff face and was somehow attached to a cave which went back a long way. There was writing on the walls of the cave. Someone coming up the track to the cottage and this time 'we' were frantically hiding the dried herbs and mixtures so that they couldn't see or find them. Definitely still a bit of a puzzle for me, though the key themes of healing, herb lore, potions and witches keep coming through. To top it off I had a surprise complimentary issue of a magazine delivered yesterday afternoon that is mainly concerned with healing - both people and the world. Is Someone trying to tell me something?! 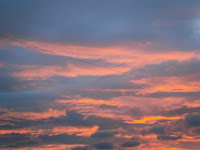 I'll leave you with my photo of the glorious sunset over Hyde Park on Friday night....

Have a blessed and a carefree as possible week x